It’s not homeless. My heart resides in a lot of different places… near the people I love most. You know what I’m talking about. It’s that treasured friend you can always be yourself around, the mentor who encouraged your journey, and books that became friends.

SALE! My etsy shop is stocked with high-quality handmade items. It’s time to make some room for new stuffs. Enjoy them yourself or give to those you love. All pre-made items are now 25% off their original price. Custom work is full-price and still a great deal. 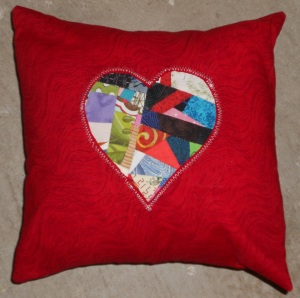 Where’s your heart? Comment below for a chance to win this 12×12″ pillow sham. Drawing ends a week from today on August 6th at midnight pacific time. Good luck!

We have a winner! Congrats Janet Mease!

I picked the first few ears of corn from the backyard this morning! Ooooh I’m excited. Couldn’t quite believe that they were done and unharmed so I opened one fully and took some leaves off the husk of the others. Look how pretty they are on the bale of hay. Looks like we’re on a real farm and everything.

Of course, we’re not on a farm. Our neighbor’s over that fence behind the cornstalks. Still, we have a nice little plot going and it’ll continue to produce corn for weeks to come. 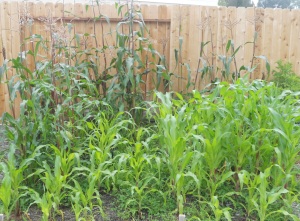 My in-laws are coming over today so my husband has asked that I wait to eat the corn. That way we can share with them. Waiting’s hard. I’m sure they’ll be delicious!

We’re also growing carrots, onions, garlic, watermelon and potatoes. The carrots are yummy… but don’t last long enough to take a photo. Even if I run, by the time I get the camera there’s only a carrot top left. Fresh carrots are sweet! The rest of the foods aren’t yet ready. I’ll keep you updated. 🙂

I’ve been a California girl for a long time now. Still, Connecticut is home. It’s where Katie is. She’s been my friend since 5th grade at Sandy Hook Elementary School. I was the new kid who had just changed schools (again) and decided not to make friends this time. Well, she would have none of that nonsense. She was gently persistent and soon I had someone to sit with at lunchtime and to play with at recess. 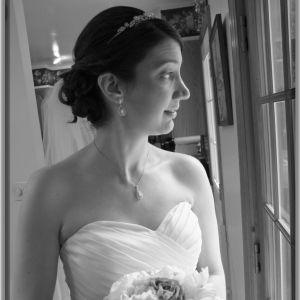 Last weekend marked her first year anniversary of getting married. I’ve been working on a quilt for her and her husband. It isn’t quite finished yet but includes paper-pieced numbers on a green background. Of course I’ll share photos of that once it’s complete.

Here we are goofing off in high school. At this time we had boyfriends who were friends before we knew them. Lots of double-dates to the movies, dances, and bowling. Then we’d ditch the boys for a sleepover, ice-cream fest, and chick flick night.

I spent my summers away and then left for college in Illinois. Still, we kept in touch. It’s one of those friendships where we don’t need any time to get to know each other again. We just pick up where we left off, even if we haven’t seen each other in years.

Katie flew west for my wedding. She’s a high school math teacher and took time off at the beginning of the school year (September 6th) to be here for me. She stayed at my house, helped with all the preparations, and celebrated with us. Here she is walking me to my bridal dressing room.

I found out recently that I have some food allergies, including a mild gluten intolerance. I’m a little bummed. You know what cheered me up quite a bit? Katie wrote a food blog post inspired by me. Here’s her recipe for crust-less spinach quiche. I can’t wait to try it!

My husband and I have a food garden this year. This watermelon looked like it hadn’t grown any more in about a week. So we called it ripe and cut it open. Not so much. Well, now we know to let the others mature a bit longer. As for Katie and I, we’ll decide just how mature we want to act as adults. It probably involves lots of ice cream. And dancing.