I saw a meme on Pinterest last night that said, “I used to be a people person until people ruined it for me.” It’s snarky but a bit of a downer. As a born introvert I actually feel the opposite way. I can totally be a people person… depending on which people you’re talking about.

Take these owls, for example. The first is dubbed “Disapproving Owl.” Surely, you can see why. This ceramic ornament was in the window next to our front door when we moved in to the new place. It felt like he was saying, “do what you want, but you’ll never be welcome here.” As soon as we could, he was removed from the house.

Actually, my husband finds it hilarious that I think this owl is so creepy… so he’s hidden Disapproving Owl somewhere in the garage. That way he can make random reappearances and wig me out. Thanks honey.

The second owl is one we bought while running errands yesterday. He was on display in hardware store. “Mo” thinks you’re curious. You may be strange but if wide-eyed Mo watches long enough you’ll no doubt do something interesting. Maybe even something spectacular! Mo is mo’ like the people who I choose to be around… who’ve helped me become a mo’ of a people person. (See what I did there?! Mo thinks it was clever.) 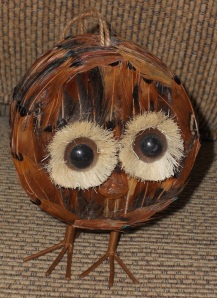 I don’t think I’ll ever really grow out of being an introvert. I value my alone time and feel overwhelmed when there’s lots of activity around me. So I’ll sit quietly in my room and Mo will look at me with encouragement and I’ll remember that I’ve chosen the right people to be around… and they’re nothing like that @#(* Disapproving Owl.