My niece was born just a few days ago on April 2nd. Her parents chose the name Mary Constance, a name rich with meaning… which still gets me all flustered when I speak it aloud. Her first name comes from both of her grandmothers: Mary and Maria. Pictured first is her Dad’s mom, Maria. She’s Mexican, living in Boston temporarily… which means she’s around to help out. She gives very nice, soft, gentle hugs.

Here’s her Mom’s mom, my mother, Mary. She passed away years ago. I like to think that baby Mary got some love from her before she arrived. I know that my mom would just be overjoyed to have a grandchild. 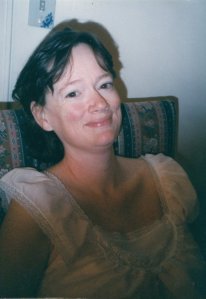 Mary’s middle name is also a family name. Her great-grandmother’s late sister was named Constance. I know her only in stories as Connie, my Aunt Lisa’s mother and grandma’s sister. What a wonderful tribute to her memory.

I started a quilt for baby Mary when I came to her baby shower in January. Since Mom and Dad were keeping her name a secret, I had family members write down their guesses for her name. Some of the guesses are pretty funny, like “Top Secret” and “Hey You!” Now that her name has been announced it’s time to work that quilt. It will have Sam Hunter’s paper-pieced letters in the center with her actual name and the hand-written guesses surrounding it.

You can get Sam’s alphabet here: http://www.huntersdesignstudio.com