I cut up an incomplete table runner this week. I gave myself permission to wreck a project that wasn’t working and turn it into something new! Here’s what it used to look like.

What inspired such a bold move? It was last week’s Project Quilting Challenge on unfinished works. Several people took meh pieces and turned them into something amazing like this and this. Click on those links. You’ll be glad you did.

So here’s my work in progress. I started by cutting the four-patches out of the table-runner. I only seam-rip when it’s absolutely necessary. The blocks were framed in green fabric I was going to trim off anyway.

They’re all beautiful Asian prints. Why are fabrics like these called that? Asia’s a continent with a wide variety of cultures, styles, and looks. It’s a little weird that this category is so broad. There are Japanese prints out there, which is a little better, but these aren’t them. 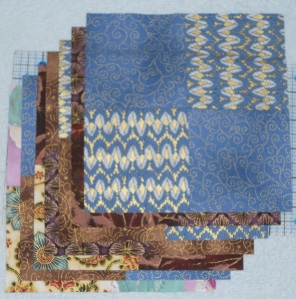 Anyway, I cut each four-patch block in diagonal twice and sewed ’em back together.

I joined the pinwheel blocks for the center and added some borders.

I like the skinny grey border near the edge and think there needs to be something similar between the pinwheels and first border. I’m not willing to rip three borders off to make it look right. Instead I’ll applique a skinny blue there. I’ll be sure to show you guys how it turns out in the end.

Project Quilting’s Voting is open through February 13th. My tiny heart is #44. Check out all of the awesome entries and choose your favorite six! The next challenge begins on Sunday the 15th.